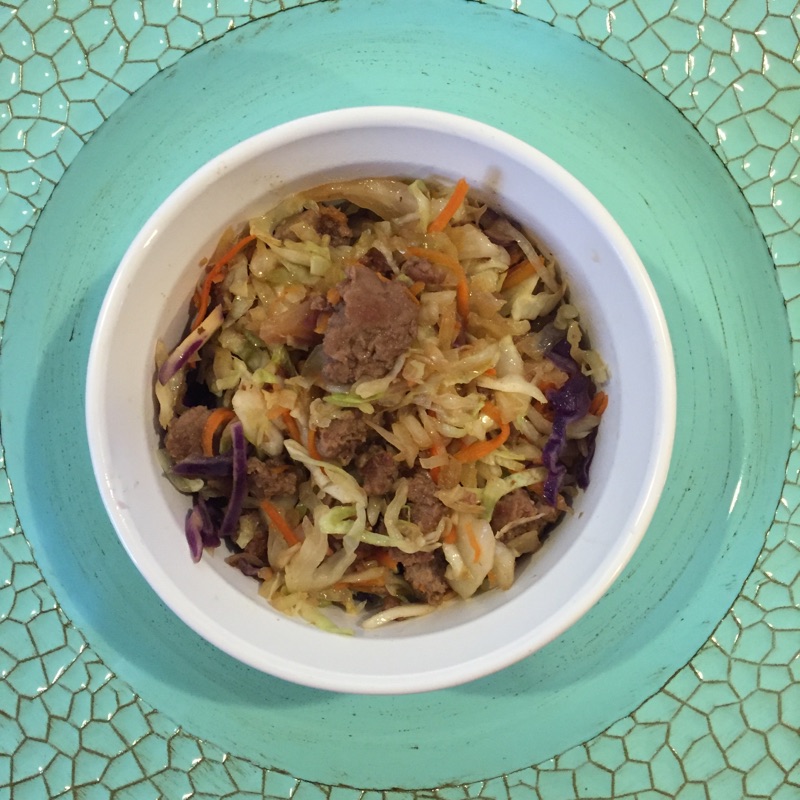 As I have stated before, my family loves Asian food.  But not every Asian food will work on a low-carb diet since so many things are battered and fried.  I love egg rolls, but they aren’t so low-carb.

That’s why we love this dish!  It’s all the great flavors of an egg roll without the fried wrapper!  It’s awesome!

In a very large skillet, crumble and brown the sausage over medium-high heat.

To the skillet, add the soy sauce, garlic, ginger, and sesame oil.  Stir to combine and cook for 2-3 minutes until sauce starts to thicken.  Add the cole slaw, just laying it on top of the sausage and sauce.  Cover the skillet, reduce heat to simmer for 5 minutes.  Remove the lid and stir to  combine.  Recover and simmer for 5 more minutes.

Well Duh #1:  You can absolutely divide this recipe in half.  I have very hearty eaters, so I make a lot!

Well Duh #2:  Don’t stand over the sausage and stir it the whole time you’re browning it.  Give it some alone time so you get some crispy caramelization!

Well Duh #3:  I used turkey breakfast sausage – which tends to clump together.  Pork sausage will make much smaller crumbles.

Well Duh #4:  When I added the cabbage, it seriously piled WAY high in the skillet.  I could barely get the lid on.  That’s why you don’t bother trying to stir it at first.  After 5 minutes, it will have wilted enough that you can stir it to combine everything.  After another 5 minutes, it should be even easier.  You don’t want to cook it much longer because you want the cabbage to keep a little of its crunch.

Well Duh #5:  If your skillet doesn’t have a lid, don’t worry.  I’ve used a pizza pan for a lid on many an occasion! 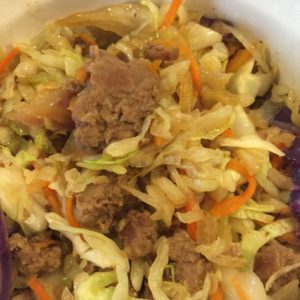 My low-carb tribe ate this up!  They really loved it!  It was filling and delicious!  The egg roll has been unwrapped! 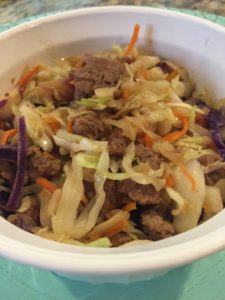