Wow!  I can’t believe I haven’t blogged in over a month!  Well, actually I can.  School started and life got thrown into high gear.  So much has happened in a month!  I won’t even try to tell you about everything, but here are some highlights:

Now this recipe is anything but typical!  When I was growing up, I used to love when Mama and Daddy would take us out for fast food – which was only about once a month.  There was one restaurant in town that served Frito Pie.  They would just cut open a small bag of Fritos, ladle in chili, sprinkle on cheese, stick in a fork, and serve it.  It was great!

This dish is everything I love in a Frito Pie, but with the convenience of a casserole.

Brown the ground beef with the onions and drain.  Add the tomato sauce, tomatoes, and taco seasoning.  Stir to combine.  Simmer for 5 minutes.  Stir in 2 cups of the cheese.

Before opening one of the bags of Fritos, use your hands to slightly crush the chips.  Pour the whole bag evenly into the bottom of a 9X13 pan.  Top with the meat mixture.  Bake for 30 minutes.

Remove from the oven and spread sour cream evenly over the top.  Sprinkle cheese over the sour cream and top with second bag of Fritos.  Return to the oven and bake for 10 minutes – or until cheese is melted.

Well Duh #1:  You can, of course, use ground turkey, chicken, or venison.

Well Duh #2:  When adding the sour cream, I spooned it around the casserole in dollops and then just used a spoon to spread it.  It’s a little messy, so don’t worry if some of the meat mixture shows through.

Well Duh #3:  This would freeze beautifully, but DON’T add the sour cream, cheese, or second bag of chips before freezing.  When you’re ready to cook it, place it in a 350-degree oven and bake for 45 minutes to an hour – until it’s hot and bubble all the way through.  Then take it out and follow the above instructions.

Well Duh #4:  I had fully planned to top this with chopped tomatoes, shredded lettuce, extra sour cream, and a little more cheese.  Maybe even a sprinkle or two of chopped cilantro.  But when it came out of the oven, it looked amazing and smelled even better!  I just couldn’t wait.  I called the tribe to dinner and we ate it!

This was gobbled up so fast!  I was really looking forward to taking some in my lunch the next day, but whatever leftovers we had were eaten later in the evening by He Who Must Not Be Named But Who Eats All The Time.

I’m just happy to have found a dish that everybody liked! 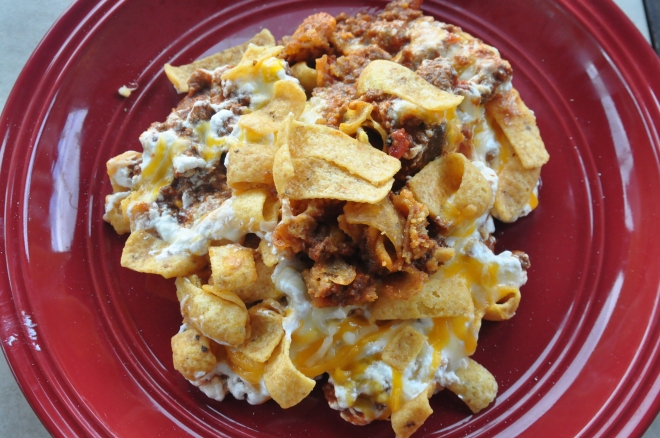