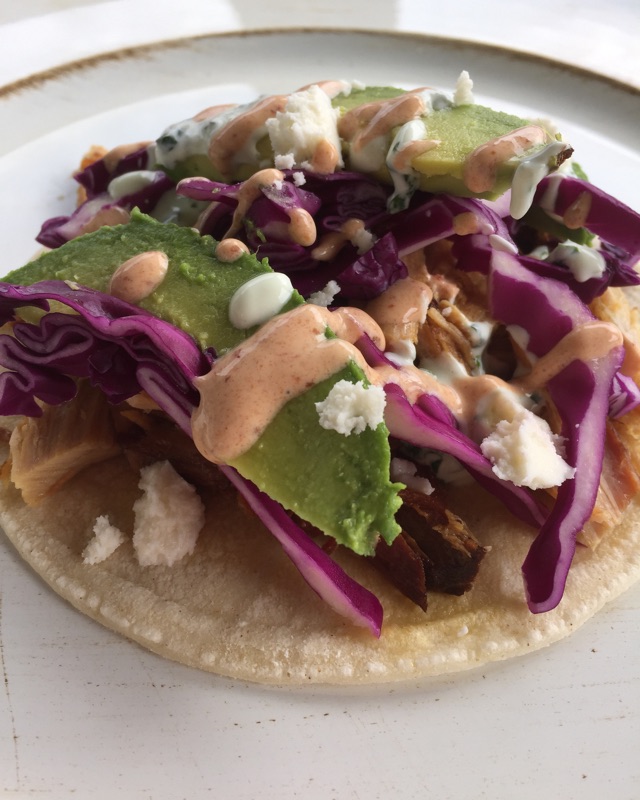 It’s hot.  August in Louisiana is sticky hot.  Humid.  Gross.  The kind of heat that takes your breath away when you open the door.  It literally feels like walking through chicken soup when you go anywhere.

I don’t care for the heat because I have too many creases in which sweat can gather.

I much prefer the cold.  I can always add another layer.  But as a woman, there’s only so much I can legally take off when it’s hot.

Yesterday was yet another in a long string of hot days, and I just couldn’t bear the thought of standing in a hot kitchen and cooking a meal.  So at 8 in the morning, I put a big pork loin in the crock pot.  And I am so glad that I did!  I bought the pork loin several months ago when I found them on sale and I stuck it in the freezer and pretty much forgot about it.  It’s just been sitting there, waiting for me to remember.  I like to top my pork loin with whole berry cranberry sauce before cooking.  You really won’t taste a lot of sweetness from the cranberry, but it does give the meat a delicious flavor.

While the pork in this dish is spectacular, I also made a couple of sauces to drizzle over the top and they are really, really good.  One member of my family may or may not have tried to drink the spicy one!

So let’s get to the good stuff!

Place the loin into a large crock pot – fat side up.  Sprinkle with a teaspoon of black pepper and 2 teaspoons of salt.  Open the can of cranberry sauce and use a spoon to break it apart before pouring it on top of the pork loin.  Cook on low for 6-8 hours.  Remove from the crock pot, peel away any remaining fat, and use two forks to shred the meat.  Be sure to add some of the cooking liquid back into the meat to keep it moist.

To assemble the tacos, use either corn or flour tortillas and your favorite toppings.

Place cilantro, lime juice, and salt into a food processor and process until very fine.  Pour into a bowl and stir in the sour cream.  Pour into a squeeze bottle

Place peppers and honey into a food processor and process until smooth.  Pour into a bowl and stir in the sour cream.  Pour into a squeeze bottle. 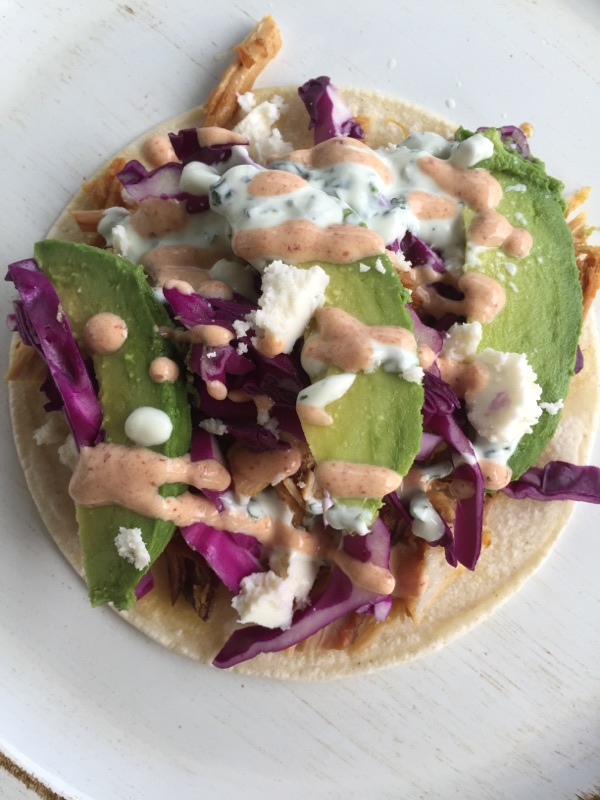 Well Duh #1:  When I made our tacos, I used corn tortillas for me and flour tortillas for the kids.  Michael skipped the tortillas and I made his stacked in a bowl.

Well Duh #2:  For our tacos, I placed the shredded pork on a tortilla and topped it with shredded red cabbage, avocados, cilantro leaves, and queso fresco.  Then I drizzled the top with both sauces.  Folding them up to eat was a bit of a challenge, but half the fun of tacos is making a mess while eating them!

Well Duh #3:  I found the squeeze bottles for less than a dollar each at Walmart.  After you use them, rinse them out – or throw them in the dishwasher.

Well Duh #4:  You will have a lot of the chipotles left.  I just poured them into a very small container and put them in the refrigerator.  You don’t ever want to store anything in an opened can.

Well Duh #5:  If your sauces keep getting stuck in the tip of the squeeze bottle, just use scissors to snip the end off and make it a little bigger.  The only downside to this is that the cap won’t fit anymore.

Well Duh #6:  I didn’t plan ahead, so I actually didn’t have time to thaw my pork loin.  I ran warm water over it to loosen the packaging from the meat and then I cut it to fit into the crock pot.  If it’s thawed, I can usually maneuver it in.  Because it was frozen – and I was at home – I started cooking it on high and then, after three hours, I turned it down to low and cooked it for another 4 hours.  It if had been thawed, I would have just cooked it on low the whole time. 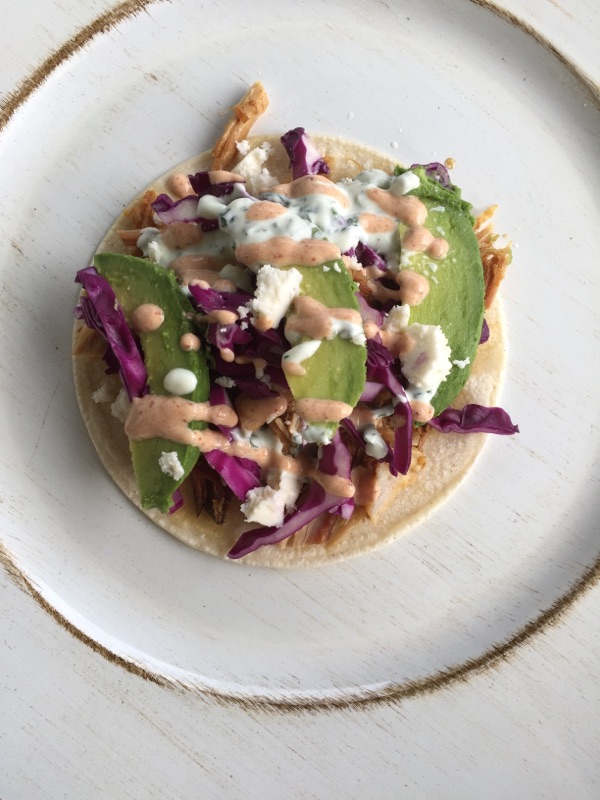 Of course, I had quite a bit of leftover pork (that was my plan!).  I just put it into a sealable container and put that into the refrigerator.  I know that we will eat it soon since we’re low-carbing and it’s a great low-carb option!  If I didn’t think that we would get to it, I would place it into a large, zippered bag, squeeze out all the air, label it, and freeze it.