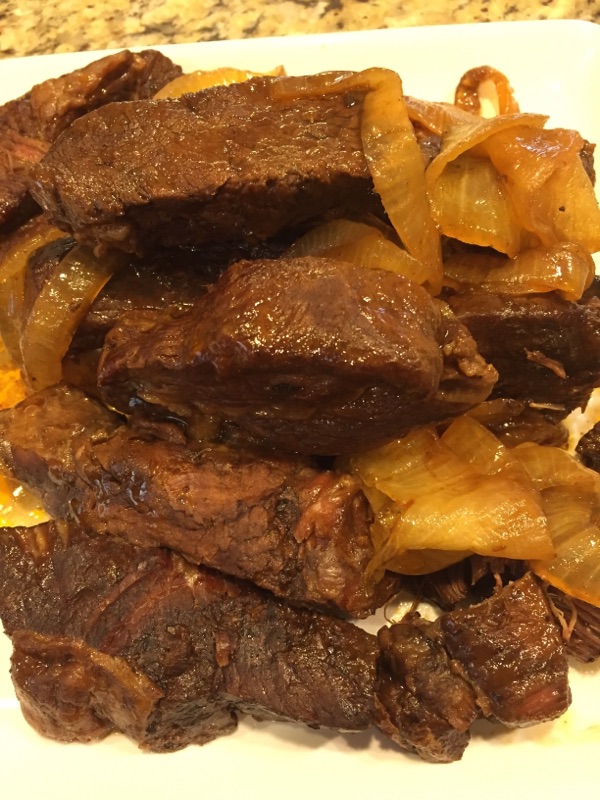 Saturday is typically my grocery day.  I spend a good deal of time planning our meals for the upcoming week.  I do this mainly in the notes section of my cell phone.  I list dinners, lunches, breakfasts, and treats and then list the needed groceries below – always in the order in which they appear in my favorite grocery store.  It’s a little bit crazy, but it’s what works for me!  Here’s this week’s list:

Yes, we’re still low-carbing.  Don’t judge me on the mac & cheese and Pizza Rolls.  I have to start back to school on Tuesday and I’m leaving those two items so that my children can make their own lunch with as little drama as possible.  It’s probably unnecessary since Christopher has been known to get up at 3 a.m. and make himself chocolate chip pancakes and Elizabeth can make a world-class omelet!    But this is easier.

I am in such mourning over the loss of my summer.  I shouldn’t say “loss.”  I totally got a summer.  I’m just sad that it’s ending.

I have friends who are elated at the prospect of school starting because they are ready for their kids to go back to school.

I actually like my kids.  I love having them at home and I love letting them sleep late after wee hour movie marathons.  I love when one of them suggests snowcones for lunch and we jump in the car and head to a snowcone stand.  I love being able to take my time and cook a great meal.  I just love summer.

Yesterday, Michael suggested country-style ribs for dinner, so that’s what I got at the store.  In case you don’t know what country-style ribs are, they are cut from the beef chuck or chuck eye roll.  They are ribs without the bones.  All the flavor and meatiness of a rib – without the work of eating around bones.  They cook up tender and meaty and delicious!

At least, these do!

Slice the onion into thick rings and separate them into the bottom of the crock pot.

Salt and pepper both sides of the ribs and then lay them on top of the onion slices.  Pour the bottle of barbecue sauce over the top and drizzle in the Liquid Smoke, if using it. 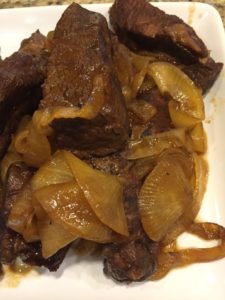 Well Duh #1:  Some people don’t like the flavor of Liquid Smoke and say that it produces an artificial flavor.  I only used about a teaspoon of it and it just gave the ribs a nice smoky flavor.  If you don’t want to use it, don’t.  Your ribs will still be fantastic!

Well Duh #2:  Doesn’t matter what kind of onion you use – white, yellow, red – it does give the meat some flavor, but it’s actually there to provide a bed on the bottom of the slow cooker so that the meat isn’t resting directly on the bottom.

Well Duh #3:  I cooked mine for 6 hours and they were perfect.  If you’re going to be at work all day and they need to cook for 8 hours, that’s fine.  They may fall apart a little more, but how could that be a problem? 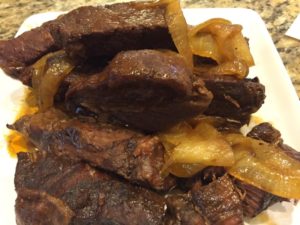 These were delicious!  My guys ate them up so fast!  Elizabeth is not a red meat fan, so I made her favorite Honey Sriracha Tofu and I ended up eating that, too, because the male of our family species devoured the ribs!  I steamed some brussels sprouts to go with them, but I didn’t get a picture of that because they were Hoovered almost immediately.  Pity, too, since the bright green color was so pretty against the browny browniness of the ribs.

Not only is this dish super low-carb, it’s absolutely delicious! 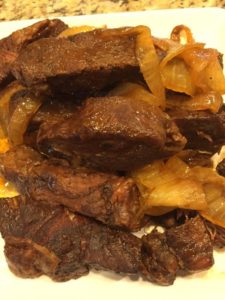